Running around EQ2X this weekend and enjoying working on some tradeskills.  Crafting in EQ2 is one of the things EQ2 does a bit better (note I said a bit better because its far from ideal) than many MMOs.  There is a bit if a minigame to it, so perfect success is not guaranteed though there is little chance of real failure, the products are genuinely useful, there is quite a diversity of recipes across a broad range of professions, it doesn’t require the generation of many many useless/valueless items to make progress and its an entirely separate progression mechanism from the rest of the game.

Of course, all crafting requires inputs.  That means gathering.  Ugh.

No MMO seems to have done this part well.  So what has the last decade brought us on the gathering front?

Random spawning, mailbox-sized chunks of “ore” that are curiously unevenly distributed in zones the difficulty of which correlates to their relative value.  How immersive.

I just looked over, and there it was...

How do we find this resource?  Mining radar of course.  Sort of Yukon Cornelius meets Aquaman.  And how is this oh so valuable ore actually gathered?  Take out your trusty pocket pick, give the ore pinata a few whacks and voila.  Paydirt.

Not exactly the picture of mining that I had in mind.  Why did they bother with Moria or Thorin’s Halls when the dwarves could have just skipped through the fields tapping rocks as they went?

Sure some games try to jazz up the immersion by actually having the nodes spawn in or near hills.  Others just don’t bother.  How the farmers in Kingsfell manage to plow their fields with all that rich iron popping up in their fields is beyond me.

I guess the Kings fell because they tripped over giant mining nodes...

Eve got it partially right.  Mining in Eve is a full-blown progression game in its own right and encourages group play.  Yes, its a bit boring with the waiting factor, but to me that is a question of how much, not whether it takes time.

So why hasn’t any fantasy MMO bothered with truly fleshing out the gathering professions properly?  I for one would love to have to go prospecting for ore deposits and constructing a mining operation out in the wilds, alone or with others.  Then figure out how to haul it all back to town all the while defending your operation from marauding mobs.

A noob miner would have little but his pick, pan, a trusty pack mule and a bit of luck.  A journeyman could construct a proper mine that would yield more, a guild could construct and man a large mine, etc.  Like scouting asteroid belts in Eve, prospecting for a good site with lots of the desired ore (to justify construction of a mine, etc.) would be half the battle.  Imagine if prospecting was a bit like WoW’s archaeology?

Of course, one aspect that is key to the viability of Eve’s mining progression is the economy.  Even the lowliest of the low minerals (Tritanium) which comes from the most abundant asteroid in the game (Veldspar) is used in nearly everything constructed in the game.

Copper doesn’t cease being useful just because I can wear or wield iron or steel or mithril items.

The same paradigm can be applied to any of the other gathering professions as well:  hunting/trapping for hides and leather; farming for food and fiber (thank you LotRO, sort of); lumber mills (with depleting forests) for wood.

Did no one at Blizzard remember the resource gathering part of Warcraft when they designed WoW?

Was an entire civilization built solely on the basis of logs of weathered driftwood that washed up on a beach or random yew branches that the wind knocked down?  Did no one think to swing one of those enormous battle axes at an actual tree from time to time?

Even fishing never progresses beyond a string on a stick… No fish traps? No one invented the throw net let alone a fishing boat? 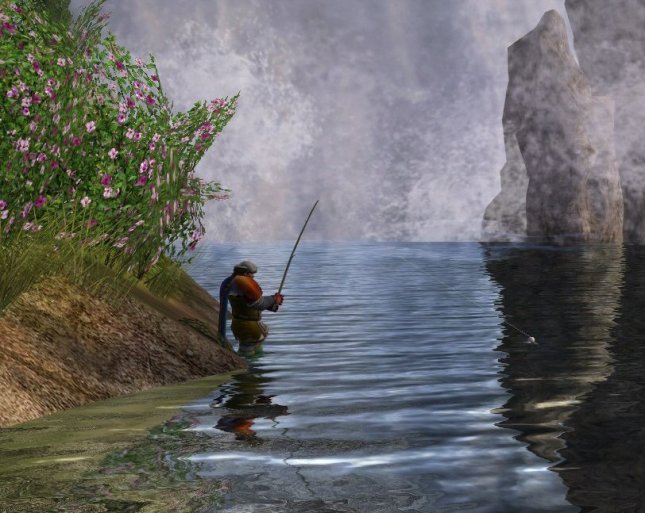 A beautiful thing, yes. But how about a net?

Of course, a key component to making a system like this work is dangerous transport.  Without some risk, there would be little excitement to the process and less value in the product.  Lets add some transportation for the poor gatherers.  Start with a big backpack, claw your way up to a donkey, add a cart, maybe an ox team and wagon…

Seriously, I’d do this all day.

← The Fun Quotient
Bridging the gap →

9 responses to “The Gathering Gloom”