The second in a continuing series of comparisons with a bit of a twist: two alternatives. I give you Barliman Butterbur, Tavern Keep of the LotRO’s Prancing Pony, Phil Collins from his early Genesis days and Ian Anderson from Jethro Tull, whom some may recall received the first and only Grammy Award for Best Hard Rock/Heavy Metal Performance or Vocal in 1989 beating out those wimps from Metallica. Flautists FTW! 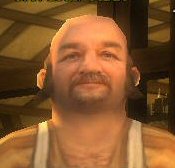